Sylvania Wrote me back! 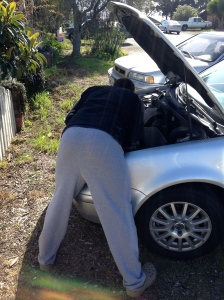 You may recall that a few weeks ago I was perplexed to find that a replacement light bulb for my headlight was marked “Made in Germany or China.”  This ambiguous labeling inspired me to seek out the history and legal parameters of country of origin marking.  After a long search, I found that the laws were fairly lax.

I decided to write Sylvania (the maker of the bulb) and ask where the bulb was actually made.  I wrote: “I recently purchased an H7 standard performance light bulb for my car.  I am very conscious of where the products I buy are made.  You indicate on the packaging of this bulb that it was ‘Made in Germany or China.’  Well, which one?  I am concerned that this is misleading to consumers, as well as in violation of 19 U.S.C. 1304 which stipulates that the country of origin must be clearly and exactly marked.  ‘Made in German or China’ has a certain non-exactness about it.”

No joke, they responded the very next day.  Their response:  “Good Afternoon [Josiah]. Thank you for contacting us with your inquiry. The H7 is made in China and Germany and that is why the package says China or Germany but the bulb itself is clearly marked with what country it is made in.”

First and foremost, thank you Sylvania for responding so promptly.  I appreciate the feedback, though I would suggest that you start using more commas… 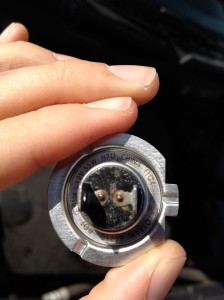 So, the bulb is made in two different countries, that is the reason for the ambiguous “or.”  And, according to their response, it is on the bulb itself where the exact country of origin is indicated.  Out to the chop shop…

They were right, the country of origin was clearly marked on the bottom of the bulb… just my luck, this bulb was made in China.  So again, I have broken my New Year’s Resolution.

But is it really my fault?  I suppose it was a bit of a risky bet on my part, but I can’t deny I feel sort of swindled.  This can’t be a legal practice can it?  Presenting two countries of origin to the customer, one who is synonymous with quality and efficiency, and the other with crap?  This can’t be right.

This time, I have decided to actually contact the gubment to see if Sylvania’s practice is legal.  I checked the Customs and Border Patrol contacts page to find an email address, but they don’t seem to have one.  I will have to call them.  If they answer their calls like they help people at the DMV, I should have an update for you guys by Sunday.  Wish me luck.

While you wait, here is a cute story.  I hit the slopes last week.  The first night in the lodge, I noticed a handsome sweater near the fireplace.  Who could have forgotten such a beautiful garment?  I checked on the sweater every night.  It remained there, lost and unloved, for the entire week.  As I left, I decided that I would adopt the sweater and take it home with me.  Stealing?  No!  Salvage.  Glancing at the tag, I was thrilled to find that it was just my size.  Glancing a little harder, I realized that this sweater and I were not meant to be after all.  But I did not let it remained orphaned!  I gifted it to my brother who gave it a fine home.